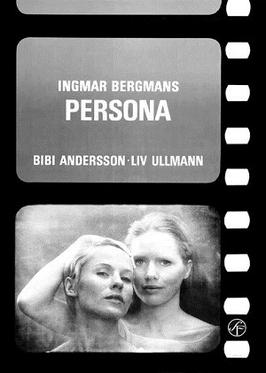 Mrs. Elisabet Vogler (Liv Ullmann), a well-known stage actress who had been mute and semi- catatonic for three months, and became Alma’s patient

During a vivid confessional monologue (one of the most explicit verbal descriptions of sex ever heard on screen), Alma (who was engaged to fiancee Karl-Henrik at the time) described a private and secret sexual experience to Elisabet that she had had at the beach with a friend named Katarina when they were sunbathing in the nude, completely naked. Two boys came up to them and Katrina encouraged one of the boys to have sex with her. Feeling left out, Alma also asked for sex too. Ultimately a second boy named Peter was also invited to participate:

Alma Monologue: I went to the beach on my own. It was a warm and lovely day. There was another girl there. She’d paddled over from another island because our beach was sunnier and more secluded. We lay there sunbathing beside one another, completely naked, dozing now and then, putting suntan lotion on. We had those cheap straw hats on, you know? I had a blue ribbon around mine. I lay there peeping out from under my hat at the landscape and the sea and the sun. It was kind of funny.

Suddenly, I saw two figures leaping about on the rocks above us. They would hide and then peek out. ‘There’s a couple boys looking at us,’ I told the girl. Her name was Katarina. ‘Let them look,’ she said, and turned over on her back. It was a strange feeling. I wanted to jump up and put on my robe, but I just lay there on my stomach with my bottom in the air, not at all embarrassed, completely calm. Katarina lay there next to me the whole time, with her breasts and thick thighs. She just lay there sort of giggling to herself. I noticed that the boys had come closer. They just stood there looking at us. I noticed they were terribly young. Then one of them, the more daring of the two, came up and squatted down next to Katarina. He pretended to be busy picking at his toes. I felt so strange.

Suddenly, I heard Katarina say, ‘Hey, why don’t you come over here?’ She took him by the hand and helped him off with his jeans and shirt. Then suddenly, he was on top of her. She guided him in with her hands on his behind. The other boy just sat on the slope and watched. I heard Katarina whisper in the boy’s ear and laugh. His face was right next to mine. It was red and swollen. Suddenly, I turned over and said, ‘Aren’t you coming over to me, too?’ And Katarina said, ‘Go to her now.’ He pulled out of her and fell on top of me, completely hard. He grabbed my breast. It hurt so bad. I was ready somehow, and came almost at once.

Can you believe it? I was about to say, ‘Careful you don’t get me pregnant’ – when he suddenly came. I felt it like never before in my life, the way he sprayed his seed into me. He gripped my shoulders and arched backwards. I came over and over. Katarina lay on her side and watched, and held him from behind. After he came, she took him in her arms and used his hand to make herself come. When she came, she screamed like a banshee. Then all three of us started laughing. We called to the other boy who was sitting on the slope. His name was Peter. He came down, looking all confused and shivering despite the sunshine. Katarina unbuttoned his pants and started to play with him. And when he came, she took him in her mouth. He bent down and kissed her back.

She turned around, took his head in both hands and gave him her breast. The other boy got so excited, that he and I started all over again. It was just as good as before. Then we went for a swim and parted ways. When I got home, Karl-Henrik was already back from town. We ate dinner and drank some red