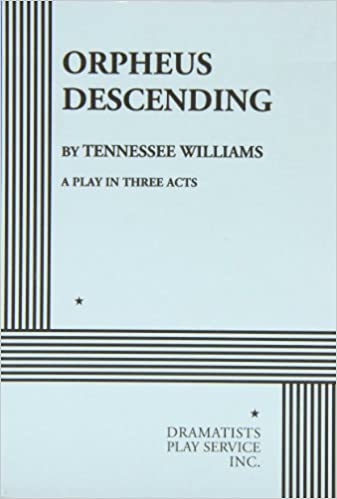 LADY: well‐you see that other room there, through that arch there? That’s the confectionery, it’s closed now but it’s going to be reopened in a short while and I’m going to compete for the night‐life in this county, the after‐the‐movies trade. And I’m going to redecorate. I got it all planned. (She is talking eagerly now, as if to herself) Artificial branches of fruit trees in flower on the walls and ceilings! ‐ it’s going to be like an orchard in the spring! ­‐ My father he had an orchard on Moon Lake. He made a wine garden of it. We sold Dagored wine an’ bootleg whiskey and beer ­‐ They burned it up one summer. An outfit in this county called the Mystic Crew rode out there one night set the whole thing on fire, and l want you to know that not a single fire engine in this county pulled out of the station that night. My papa, he took a blanket and run up into the orchard to fight the fire single handed. He burned alive in it… burned alive! heard him scream in the orchard ­‐ I ran ­‐ I fell ‐ I saw him run toward me with his clothes on fire. Whenever I look at a man in this county, I wonder if he was one of ’em that set our orchard on fire!