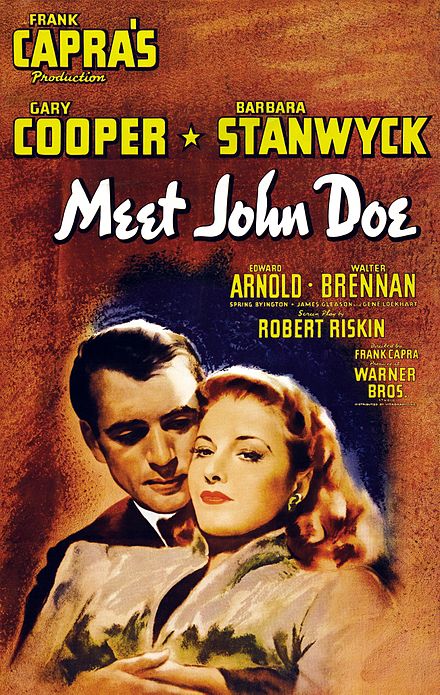 Meet John Doe (1941) Screenwriter: Robert Riskin The fictional John Doe (Gary Cooper) (aka Long John Willoughby) delivered a radio address – an idealistic appeal to the common man – all the John Does (“the little punks”) in the world – to get up on their feet and pull together as a team:

Monologue: Ladies and Gentlemen, I am the man you all know as John Doe. I took that name because it seems to describe, because it seems to describe the average man – and that’s me. (He cleared his throat) And that’s me. Well, it was me before I said I was gonna jump off the City Hall roof at midnight on Christmas Eve. Now I guess I’m not average anymore. Now I’m getting all sorts of attention, from big shots too, the mayor and the governor, for instance. They don’t like those articles I’ve been writing…

Well, people like the governor, people like the governor and that fellow there can stop worrying. I’m not going to talk about them. I’m gonna talk about us – the average guys, the John Does. If anybody should ask you what the average John Doe is like, you couldn’t tell him because he’s a million and one things. He’s Mr. Big and Mr. Small, he’s simple and he’s wise, he’s inherently honest but he’s got a streak of larceny in his heart. He seldom walks up to a public telephone without shovin’ his finger into the slot to see if somebody left a nickel there. (Laughter) He’s the man the ads are written for. He’s the fella everybody sells things to. He’s Joe Doakes, the world’s greatest stooge and the world’s greatest strength.

Yes sir, yes sir, we’re a great family, the John Does. We are the meek who are, who are supposed to inherit the earth. You’ll find us everywhere. We raise the crops, we dig the mines, work the factories, keep the books, fly the planes and drive the buses, and when a cop yells, ‘Stand back there you,’ he means us – the John Does… We’ve existed since time began. We built the pyramids. We saw Christ crucified, pulled the oars for Roman emperors, sailed the boats for Columbus, retreated from Moscow with Napoleon, and froze with Washington at Valley Forge. Yes sir, we’ve been in there dodgin’ left hooks since before History began to walk. In our struggle for freedom, we’ve hit the canvas many a time, but we always bounced back because we’re the people – and we’re tough. (Applause)

They’ve started a lot of talk about free people goin’ soft, that we can’t take it. That’s a lot of hooey! A free people can beat the world at anything, from war to tiddly-winks if we all pull in the same direction. (Applause) I know a lot of you are saying, ‘What can I do? I’m just a little punk. I don’t count.’ Well, you’re dead wrong. The little punks have always counted because in the long run, the character of a country is the sum total of the character of its little punks. (Applause)

But we’ve all got to get in there and pitch. We can’t win the old ball game unless we have teamwork. And that’s where every John Doe comes in. It’s up to him to get together with his teammate. And your teammate, my friends, is the guy next door to ya. Your neighbor – he’s a terribly important guy, that guy next door. You’re gonna need him and he’s gonna need you, so look him up. If he’s sick, call on him. If he’s hungry, feed him. If he’s out of a job, find him one. To most of you, your neighbor is a stranger, a guy with a barkin’ dog and a high fence around him. Now you can’t be a stranger to any guy that’s on your own team. So tear down the fence that separates you. Tear down the fence and you’ll tear down a lot of hates and prejudices. Tear down all the fences in the country and you’ll really have teamwork. (Applause)

I know a lot of you are saying to yourselves: ‘He’s askin’ for a miracle to happen. He’s expecting people to change all of a sudden.’ Well, you’re wrong. It’s no miracle. It’s no miracle because I see it happen once every year and so do you – at Christmas time. There’s something swell about the spirit of Christmas, to see what it does to people, all kinds of people. Now why can’t that spirit, that same warm Christmas spirit, last the whole year round? Gosh, if it ever did, if each and every John Doe would make that spirit last 365 days out of the year – we’d develop such a strength, we’d create such a tidal wave of good will that no human force could stand against it. Yes sir, my friends, the meek can only inherit the earth when the John Does start loving their neighbors. You’d better start right now. Don’t wait till the game is called on account of darkness. Wake up, John Doe, you’re the hope of the world!