All The Kings Men 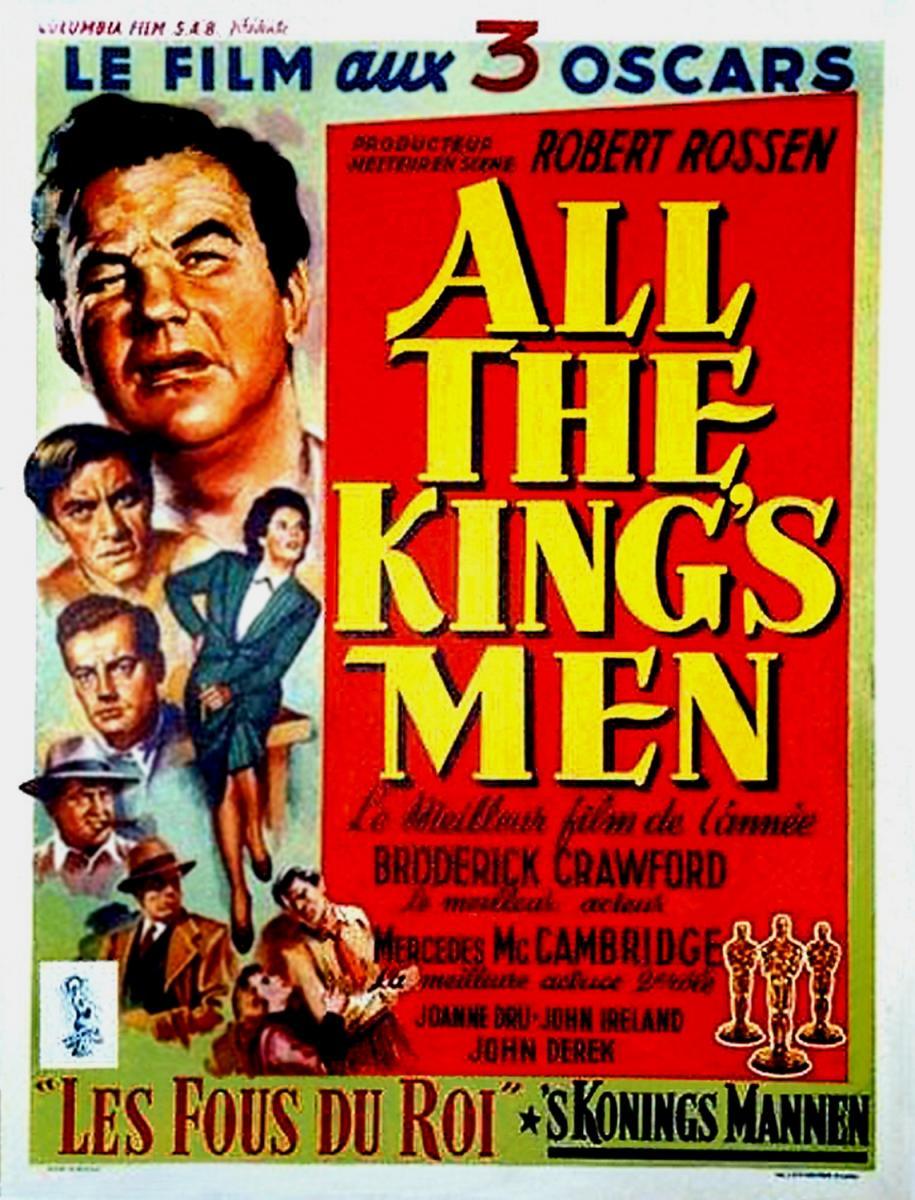 All the King’s Men (1949) Screenwriter(s): Robert Rossen Willie Stark (Broderick Crawford) gave a no-notes rousing, half-drunken campaign speech at a fairgrounds barbecue, during his campaign for Louisiana governor, when he threw away his prepared speech: Willie Monologue: My friends, my friends, I have a speech here. It’s a speech about what this state needs. There’s no need in my telling you what this state needs. You are the state and you know what you need. You over there, look at your pants. Have they got holes in the knees? Listen to your stomach. Did you ever hear it rumble for hunger? And you, what about your crops? Did they ever rot in the field because the road was so bad you couldn’t get ’em to market? And you, what about your kids? Are they growin’ up ignorant as dirt, ignorant as you ’cause there’s no school for ’em? Naw, I’m not gonna read you any speech. But I am gonna tell ya a story. It’s a funny story so get ready to laugh….Get ready to bust your sides laughin’, ’cause it’s sure a funny story. It’s about a hick, a hick like you, if ya please. Yeah, like you. He grew up on the dirt roads and the gully washes of a farm. He knew what it was to get up before dawn and get feed and slop and milk before breakfast, and then set out before sunup and walk six miles to a one-room, slab-sided schoolhouse. Aw, this hick knew what it was to be a hick, all right. He figured if he was gonna get anything done, well, he had to do it himself. So he sat up nights and studied books. He studied law, because he thought he might be able to change things some – for himself and for folks like him. Now I’m not gonna lie to ya. He didn’t start off thinkin’ about the hicks and all the wonderful things he was gonna do for ’em. Naw, naw, he started off thinkin’ of number one. But somethin’ came to him on the way. How he could do nothin’ for himself without the help of the people. That’s what came to him. And it also came to him with the powerful force of God’s own lightning back in his home county when the school building collapsed ’cause it was built of politics’ rotten brick. It killed and mangled a dozen kids. But you know that story. The people were his friends because he’d fought that rotten brick. And some of the politicians down in the city, they knew that, so they rode up to his house in a big, fine, shiny car and said as how they wanted him to run for Governor….And he swallowed it. He looked in his heart and he thought in all humility, how he’d like to try and change things. He was just a country boy who thought that even the plainest, poorest man can be Governor if his fellow citizens find he’s got the stuff for the job. All those fellas in the striped pants, they saw that hick and they took him in… There he is! There’s your Judas Iscariot! Look at him! …Look at him….! (Chaos) Now, shut up! Shut up, all of ya! Now listen to me, ya hicks. Yeah, you’re hicks too, and they fooled you a thousand times just like they fooled me. But this time, I’m gonna fool somebody. I’m gonna stay in this race. I’m on my own and I’m out for blood. Now listen to me, you hicks! Listen to me, and lift up your eyes and look at God’s blessed and unfly-blown truth. And this is the truth! You’re a hick, and nobody ever helped a hick but a hick himself! Alright, listen to me! Listen to me! I’m the hick they were gonna use to split the hick vote. Well, I’m standin’ right here now on my hind legs. Even a dog can learn to do that. Are you standin’ on your hind legs? Have you learned to do that much yet? Here it is! Here it is, ya hicks! Nail up anybody who stands in your way! Nail up Joe Harrison! Nail up McMurphy! And if they don’t deliver, give me the hammer and I’ll do it myself!