The Hairy Ape By Eugene O’Neill 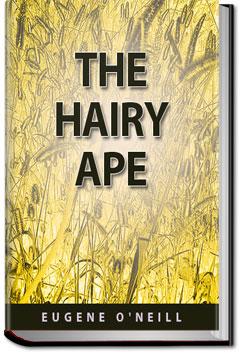 YANK: I scared her? Why de hell should I scare her? Who de hell is she? Ain’t she de same as me? Hairy ape, huh?

(With his old confident bravado.)

I’ll show her I’m better’n her, if she on’y knew it. I belong and she don’t, see! I move and she’s dead! Twenty-five knots a hour, dats me! Dat carries her but I make dat. She’s on’y baggage. Sure!

But, Christ, she was funny lookin’! Did yuh pipe her hands? White and skinny. Yuh could see de bones trough ’em. And her mush, dat was dead white, too. And her eyes, dey was like dey’d seen a ghost. Me, dat was! Sure! Hairy ape! Ghost, huh? Look at dat arm!

(He extends his right arm, swelling out the great muscles.)

I coulda took her wit dat, wit’ just my little finger even, and broke her in two.

Say, who is dat skoit, huh? What is she? What’s she come from? Who made her? Who give her de noive to look at me like dat? Dis ting’s got my goat right. I don’t get her. She’s new to me. What does a skoit like her mean, huh? She don’t belong, get me! I can’t see her.

But one ting I’m wise to, aw right, aw right! Youse all kin bet your shoits I’ll git even wit her. I’ll show her if she tinks she- She grinds de organ and I’m on de string, huh? I’ll fix her! Let her come down again and I’ll fling her in de furnace! She’ll move den! She won’t shiver at nothin’, den! Speed, dat’ll be her! She’ll belong den!