The Glass Menagerie By Tennessee Williams 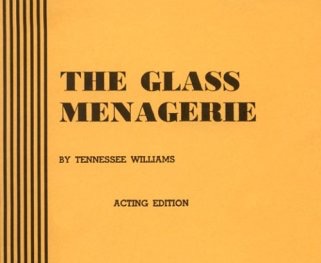 AMANDA:I went to the typing instructor and introduced myself as your mother. She didn’t know who you were. Wingfield, she said. We don’t have any such student enrolled at the school! I assured her she did, that you had been going to classes since early in January. ‘I wonder,’ she said, ‘if you could be talking about that terribly shy little girl who dropped out of school after only a few days’ attendance?’ ‘No,’ I said, ‘Laura, my daughter, has been going to school every day for the past six weeks!’ ‘Excuse me,’ she said. She took the attendance book out and there was your name, unmistakably printed, and all the dates you were absent until they decided that you had dropped out of school. I still said, ‘No, there must have been some mistake I There must have been some mix‐up in the records!’ And she said, ‘No – I remember her perfectly now. Her hands shook so that she couldn’t hit the right keys! The first time we gave a speed‐test, she broke down completely ‐ was sick at the stomach and almost had to be carried into the wash‐room! After that morning she never showed up any more. We phoned the house but never got any answer’ – while I was working at Famous and Barr, I suppose, demonstrating those – Oh! I felt so weak I could barely keep on my feet! I had to sit down while they got me a glass of water! Fifty dollars’ tuition, all of our plans – my hopes and ambition for you – just gone up the spout, just gone up the spout like that.