Noises Off By Michael Frayn 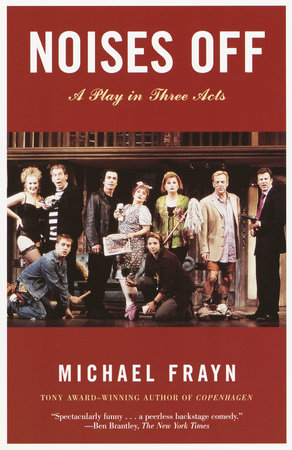 DOTTY OTLEY: “It’s no good you going on. I can’t open sardines and answer the phone. I’ve only got one pair of feet. Hello…. Yes, but there’s no one here, love…. No, Mr. Brent’s not here…He lives here, yes, but he don’t live here now because he lives in Spain… Mr. Philip Brent, that’s right…. The one who writes the plays, that’s him, only now he writes them in Spain… No, she’s in Spain, too, they’re all in Spain, there’s no one here… Am I in Spain? No, I’m not in Spain, dear. I look after the house for him, but I go home at one o’clock on Wednesday, only I’ve got a nice plate of sardines to put my feet up with, because it’s the royal what’s-it’s called on the telly — the royal you know — where’s the paper, then? And if it’s to do with letting the house then you’ll have to ring the house-agents, because they’re the agents for the house…. Squire Squire, Hackham and who’s the other one…? No, they’re not in Spain, they’re next to the phone in the study. Squire, Squire, Hackham, and hold on, I’ll go and look. Always the same, isn’t it. Soon as you take the weight off your feet, down it all comes on your head.”